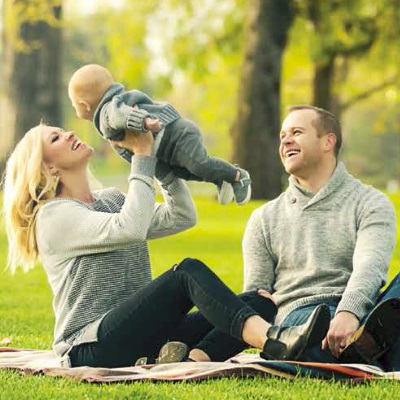 The only choice for a Denver doula

Dim lights and soft music greeted Bree Wolfe when she walked into the room where she would have her baby. With her husband by her side, her family in the waiting room, and smiling nurses all around, Bree felt a sense of peace as she readied for the miracle she wasn’t sure would ever happen. Then she climbed onto the operating table.

For Bree, who proclaimed at age 3 that she was going to be a “baby doctor,” it wasn’t the birthing scenario she had envisioned. For years, the Denver doula planned a midwife attended, wholly natural, water birth. But that dream was crushed by an auto-accident injury, which made the risk of stroke during labor too high.

Bree told her husband that if they must have a C-section, then they would have their baby at Rose Medical Center. “I wouldn’t have had him anywhere else,” says Bree, who has attended births at every hospital in the Denver area and knew Rose providers would make her son’s birth as special as possible.

Before they married, Bree and Shane Wolfe knew they wanted babies. They even had names picked out. A few months after the wedding, the Littleton couple was ecstatic to learn Bree was pregnant, a joy short-lived when she miscarried eight weeks later. A second attempt also ended in miscarriage.

After learning she was low in progesterone, a hormone necessary for pregnancy, Bree began supplements and eventually learned she was pregnant with twins. “We went in for an ultrasound two weeks later, and one of them was gone,” Bree says. “It was really hard.” But
they still had baby Hudson, who gave his parents a rough ride. Mom was sick and in and out of Rose with early contractions during her third trimester.

Five days before the scheduled C-section, Bree woke up with contractions. This time they were not stoppable, and Hudson was breach.  They said they needed to do the C-section now.” But the staff at Rose, where Bree was able to have her midwives for care and a high-risk obstetrician to deliver her baby, kept her relaxed.

“Even though I knew a lot of them, they treated me like a patient. I love that, because everywhere else I’d go, people knew me as a doula and would expect me to know everything. At Rose, I felt like I could ask whatever question I needed.”

Rose also gave her the family-centered C-section experience she wanted, never rushing her and letting her wait for family and her photographer to arrive. Then, Bree and Shane walked hand in hand to the operating room, where they witnessed their baby’s birth together (Bree seeing Hudson’s first moments through a clear drape Rose offers on request).

Dad cried first, soon joined by Hudson, and then by mom. Shane cut the cord, and as he walked toward Bree with their new gift, the OR rang out in the “Happy Birthday” song. Shane laid Hudson on Bree’s chest, where they bonded skin-to- skin while the C-section was finished. “Having my own, live crying baby on my chest was like … time stopped,” says Bree. “I kept asking if he was real, if he was mine. It was amazing. It was as natural and as beautiful as it could be.”