Is Your Teen 'Juuling'?

It’s easy to hide. It’s addictive. It’s the new, viral trend to hit schools and raise health concern for medical professionals across the country. What is juuling?

Juul is a type of electronic cigarette – one of the more popular brands – and inhaling it is known as “juuling.”  The maker of Juul has claimed that is intended for adult use only. However, due to its design, small size (easily concealable from teachers and parents) and flavors such as mint, crème brulee and mango, it has become appealing to adolescents, says Joseph Rosen, MD, pediatric pulmonary and sleep medicine specialist at The Woman’s Hospital of Texas in Houston.

“E-cigarettes are now the most commonly used tobacco products among youth,” Dr. Rosen said, “and Juul, specifically, is the number one selling e-cigarette as of January 2018.”

So, what do parents need to know? Dr. Rosen, who has co-authored two chapters on smoking and adolescents, explains.

What makes the Juul unique?

Most e-cigarettes are cylindrical, whereas the Juul looks like a USB flash drive. It can be charged by plugging it into a USB port on a laptop in the same way that a phone can be charged. Also, it does not have the distinctive smell of cigarettes, so it is more difficult for adults to detect when teens are juuling.

Where can it be purchased?

Juul is an electronic nicotine delivery system. It can be purchased from any place that sells e-cigarettes or tobacco products. Also, it can be purchased online. The Juul online website requires at least some age verification, but third-party sellers may get around it. More expensive than traditional cigarettes or other e-cigarettes, a kit can run between 20 to 55 dollars. This may discourage some adolescents from using it. 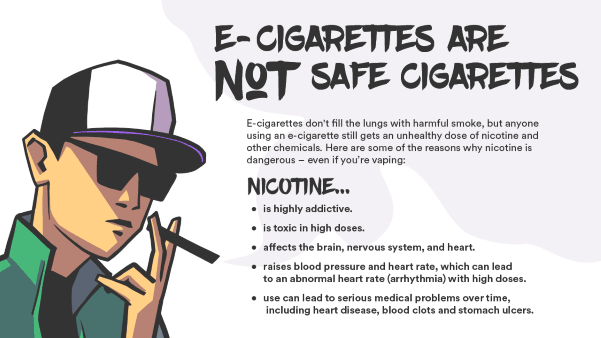 What is the purpose of e-cigarettes?

For the Juul, specifically, the creators claim that it is intended as an alternative to smoking cigarettes, not a method to stop smoking.

What are the health risks of juuling?

Juuling contains nicotine and that is extremely addictive. According to Juul, one pod contains about as much nicotine as one pack of cigarettes. A recent study revealed that the use of e-cigarettes by high school students doubled the risk for chronic bronchitis symptoms. Also, “popcorn lung”, a medical condition formally known as bronchiolitis obliterans, may develop in e-cigarette users due to a chemical called diacetyl(1). That causative agent is used in more than 75 percent of e-cigarettes to produce flavors such as maple, coconut, vanilla or others. According to Juul, they do not add diacetyl and acetylproprionyl (or 2,3-pentanedione) as flavoring ingredients. That said, the ingredient list of the e-liquid formula used in Juul is not available to the public.

It took many decades to firmly demonstrate the dangers of cigarette smoking. There has not been adequate time to do these studies for e-cigarettes, which are relatively new. I am not aware of any studies comparing Juuling to smoking cigarettes. However, two new studies on e-cigarettes showed they contain cancer-causing chemicals and are associated with future cigarette smoking in teens.

What do parents need to know about juuling?

In 2015, 37.7 percent of high school students had tried e-cigarettes and the use of e-cigarettes has been going up since then. Many youth who use e-cigarettes are unlikely to have initiated tobacco smoking with cigarettes. So, e-cigarettes are expanding overall use of tobacco products among youth, rather than replacing other sources. Most importantly, e-cigarettes (including Juul) are not a safe alternative to smoking. E-cigarettes should not be used for treatment of tobacco dependence in teens, as they have not been shown to be safe or effective.

What advice would you give parents about juuling?

Our Rocky Mountain Kids magazine is published several times a year. It provides timely information about your growing babies, children and teens.